By Bob HohenbergerMarch 14, 2017No Comments

As for professional singing status, though, there are a few different ways in which you can tell that we get results. Some of our protégés go on to record albums. Others become touring musicians, singing every night and making a living doing so. Others become sensations on YouTube and other social media channels.

The latest Ken Tamplin Vocal Academy success story is Xiomara Crystal. Allow us to take just a minute to share Xiomara’s accomplishments with you. 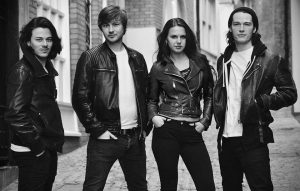 Starting at the end of March, Xiomara will begin touring with the Rock Meets Classic Mega Tour, appearing each night alongside true legends of rock and roll. This is a testament to professional singing status!

The eighth edition of the Rock Meets Classic lineup will feature performances in 15 cities across Germany, plus one performance in Sweden. Each show will feature a three-hour pileup of rock and roll legends, performing all their hits and backed by a full orchestra! Xiomara will be a featured singer on two songs, plus a supporting vocalist for these marathon performances.

Also featured on the bill are some truly iconic figures of rock—including Rick Springfield and members of Toto, The Eagles, and Uriah Heep. Orchestral flourishes will be provided by the Bohemian Symphony Orchestra, with help from the Mat Sinner Band.

From Amateur to Professional

Crystal herself is an actress, model, and singer who has a degree from the London Academy of Music—yet she says her time studying with Tamplin has been the most powerful training she could ask for. “I learned more from Ken Tamplin in just a few weeks, than all of my singing education combined,” she says. “He is the real deal. My voice has exploded into something amazing, thanks to Ken’s tutelage.”

We couldn’t be prouder of Xiomara’s transformation from amateur singer into professional one—and we want to emphasize that such a transformation is available to anyone! If you dream of becoming a skilled, working vocalist, we encourage you to contact Ken Tamplin Vocal Academy today and learn about some of the resources we can deliver.